For years, a patchwork of afterschool programs in Dallas have provided care for thousands of children and reassurance to working parents their kids are in a safe place for the hours after classes end.

Then the pandemic hit—and like so many other facets of family life in America, Dallas’ afterschool programs felt the effects, closing down or drastically shrinking as program staff quit for higher paying jobs in other industries and fear over COVID-19.

With fewer spots available, children are now waiting up to 60 days to be enrolled. Another way to see it: For every child in an afterschool program in Dallas, there are three to four waiting for an available spot.

“We saw there was about a 45 percent seat loss in programs that were either no longer able to run, or that had to close,” said Dallas Afterschool vice president of program services Marjorie Murat. “These afterschool programs are really a lifeline for working families, and they exist to support the working families and sustain the family unit.”

The afterschool shortage in Dallas is not unique.

As the pandemic has continued, afterschool programs across the country are facing staffing shortages, forcing them to reduce the number of children they serve or close down completely.

COVID-19 has exacerbated the long-standing issue of low wages of afterschool staff, advocates said. Most afterschool care programs have a starting salary of $9-$12 an hour. Coupled with rising concerns about the virus and now the Delta variant, many are not returning to work, with some leaving for jobs that pay much more and are less risky.

The staff shortages have resulted in child care headaches for parents like Jessica Canales, a Dallas employment recruiter, whose kids were waitlisted for weeks after returning to school in early August. Pent up demand created a huge need for afterschool care.

For weeks, with no childcare in place, Canales was forced to leave work, picking up her children at 1 p.m., halfway through the school day. “My kids would miss everything else,” she said.

It took a direct appeal to the principal to finally get her kids off the waitlist and into the program.

“It was very frustrating,” said Canales, “especially when you have two parents working … I was so stressed out, I thought I had to quit my job.”

The issue of retaining afterschool workers is longstanding, advocates say.

“Before working during the pandemic, these jobs barely paid a living wage, let alone access to sick leave,” said Jodi Grant, executive director of the Afterschool Alliance. Once COVID-19 hit, she said, workers became fearful about showing up for work.

In at least one state, afterschool workers who refused to get vaccinated have continued to come to work and are wearing masks — prompting some colleagues to leave their posts.

There have been warning signs the worker shortage in afterschool has been getting worse in the last 18 months.

A national report by the Afterschool Alliance found more than half of summer programs (52 percent) — many of which also run afterschool programs — have waitlists compared to 40 percent last summer. Officials say the increase is due to staffing shortages created by the pandemic.

The workers have found opportunity and less risk during the pandemic: Within the last 16 months, afters school staff in some Omaha, Nebraska programs have been leaving for higher paying jobs at outlets such as Target and other businesses where workers start at $15 an hour compared to the $11.50 to $12 an hour offered to starting afterschool workers.

“We have sites that will not be able to open because they just don’t have the staff,” said Megan Addison, Executive Director of Collective for Youth in Omaha.

“We have sites that will not be able to open because they just don’t have the staff,” said Addison, Executive Director of Collective for Youth in Omaha.

In addition to low pay, advocates say workers have little room to grow.

“People have to look into other industries not only due to money but also due to the lack of social mobility within the sector. It’s very hard for people to grow and move on into other positions,” said Lissette Castillo, the Director of Community Schools in Cambridge, Massachusetts. “For example, educators can move from paraprofessional to educators to administrators, there is a lack of support for afterschool staff to have access to programming like that.”

With news of the Delta variant, other afterschool care programs are also struggling to navigate vaccine and mask mandates and protocols. In Nebraska, when educators were able to get vaccinated in early spring, only 50 percent of the afterschool staff at Collective for Youth programs did so.

“A majority of our staff are younger, and we also work with a lot of people of color who had some concerns regarding the vaccination. Some staffers also already had gotten COVID-19 and didn’t feel the need to get vaccinated,” said Addison. “Being a Republican state, and having many opportunities to get vaccinated, many of our partners are leaning towards optional, to not seem self-superior.”

Some Omaha afterschool centers are operating with non-vaccinated staff, but are still short staffed as workers fearful of getting sick leave their job, said Chief Operating Officer of Kids Can Community Center, Josh Gillman.

“We’ve been operating with 70 percent of our staff being vaccinated, and the other 30 percent who have declined even though they’ve been offered. We require all staff to wear masks presently at all times,” Gillman said. “Our normal daily service scope of students would be 800 if we were fully staffed, but right now we have 20 vacancies with our normal 70 positions…which reduces our capacity by a couple hundred of students we can serve each day until we wait to fill those positions.”

In Minnesota, an afterschool official in Saint Paul said the most alarming issue for afterschool programs is the lack of follow through with COVID-19 safety protocols, as administrators avoid having the corrective conversations with staff and students.

“People will say it’ll be safe if we all wear masks and stay six feet apart. But when you enter a building, and people aren’t wearing masks and aren’t six feet apart, those that are a little bit more sensitive to the health risks of COVID-19 don’t feel comfortable,” said one official. “And the principals and assistant principals in the past haven’t done anything, because we did go back to school last spring, and that was a big issue.”

As the United States intends to return to normalcy, with some delays due to the Delta variant, afterschool care programs will be integral to aid those with children in order to go back to work. 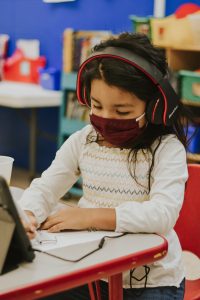 “Many people have no choice but to go back to the workforce and put their fears aside…there are many reports out there and research on the impact of afterschool and how it is an integral part of children’s learning,” said Castillo. “And yet the [afterschool care] staff at the frontline have been shamefully neglected and disregarded and the field itself has yet to receive the recognition and the respect that it deserves. Keeping in mind how families need to go back to work and the ones at the frontline will be on the line helping them get back to work.”

For her part, Canaldes knows she was lucky — lucky that she could leave her job and pick up her children early while she wanted for a spot in the afterschool program; and lucky she was able to finally get them into the program.

“There’s certain families who cannot wait three to four weeks to find afterschool care programs, especially with the epidemic and everybody going back to school. It’s an immediate challenge,” said Canales. “It is very frustrating.”