Many parents are rethinking the value of a traditional four year college education, opting instead for hands-on experiences for their children such as vocational education programs, joining the military or starting their own business, a new poll has found.

Even without obstacles such as finances, nearly half of parents want alternatives to four-year college for their children, according to the survey which is part of a national report, Family Voices: Building Pathways From Learning to Meaningful Work from the Carnegie Corporation of New York and Gallup.

The most recent decline in interest among American parents in college is part of an ongoing trend for nearly ten years, prior polls show. A 2019 Gallup poll found just over half of Americans, 51 percent, believed a college education was “very important,” a 19-point decrease from the 70% of U.S. adults who said the same in 2013.

The most recent national poll of 3000 parents was conducted in November and December 2020, as the pandemic continued, with hopes that “policymakers and education leaders use its findings to build a cradle-to-career education system that prepares all our nation’s young people for the bright futures they deserve.”

LaVerne Evans Srinivasan, vice president of the Carnegie Corporation of New York, said the message from the data is “clear.”

“While attending a four-year college remains the gold standard for many families, nearly half of parents … wish that more postsecondary options existed,” she said. “We need to expand and strengthen postsecondary pathways so that young people are exposed to the world of work before graduating from high school and have access to a robust array of career-related learning opportunities afterwards.” 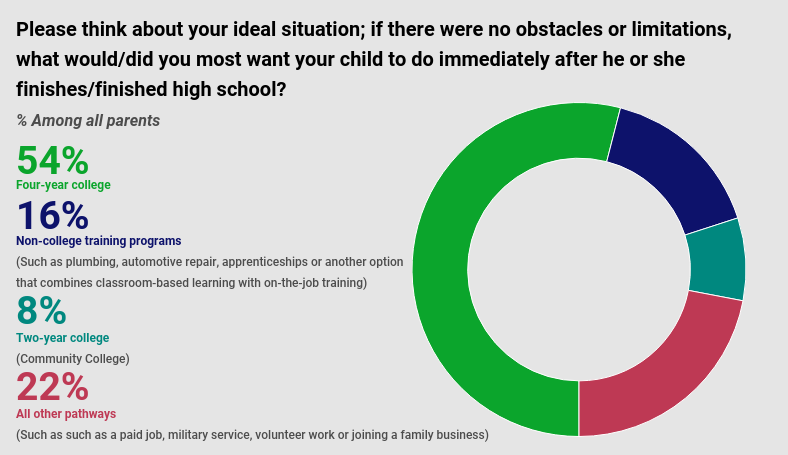 If there were no barriers or obstacles to their child doing so, just over half of parents (54%) said they would most want their child to pursue a bachelor’s degree after high school. (Gallup)

1. Black parents were more likely to prefer their child pursues a bachelor’s degree

Seventy percent of Democrats said they would prefer their child pursue a bachelor’s degree, compared to 46 percent of Republicans. In a similar sentiment, a Gallup study from 2019 found Republicans to be significantly less likely than Democrats or independents to say that a college education is “very important.” A 2017 Gallup survey found many Republicans were critical of higher education for “pushing a liberal agenda.”

These programs include training for a trade or vocation, such as plumbing or automotive repair, specialized technical skills, such as information technology or installing and maintaining solar panels, apprenticeships, or another option that combines classroom-based learning with on-the-job training. Those who were questioned believe “experiential pathways” provide better career preparation than college.

4. About one-third of parents who went to college do not want their child to do the same

Despite affordability, just eight percent of parents favored two-year or community college in place of a four-year school. Although community colleges often “offer associate degrees that focus on developing skills specific to a career path, such as paralegal or dental hygienist programs” parents were nearly twice as likely to want their child to complete a skills-training program instead.

The survey found parents did not believe a two-year college delivers the same level of quality that they associate with the training programs offered at the schools.

6. Household income was not a significant predictor of whether a parent wants their child to attend college

The survey shows these differences depend more on other factors, like where the family lives. Parents living in cities and suburbs were significantly more likely to want their child to pursue a bachelor’s degree than those who live in towns or rural areas.