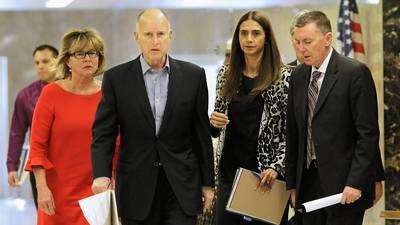 LAUSD Superintendent John Deasy was in Sacramento Wednesday for a press conference in support of Governor Jerry Brown’s proposal to shift more funding to school districts like LAUSD that have large numbers of poor and English Language Learner students.

Brown’s central message to lawmakers: resistance is futile. “If people are going to fight it, they’re going to get the battle of their lives, because I’m not going to give up until the last hour, and I’m going to fight with everything I have, and whatever we have to bring to bear in this battle, we’re bringing it,” he said.

Deasy said Brown’s proposal “brings to life the promise of equity long overdue in this state,” according to the Sacramento Bee.

Edgar Zazueta, Director of Governmental Relations for LAUSD, said he and Deasy were confident that Brown would get at least most of what he wants. “There’s still a lot of skepticism in the Assembly. But the tide is turning.”

Funding for all school districts is expected to rise over the next two decades. Brown’s plan with send a disproportionate amount of the new money to school districts like LAUSD that have a lot of low-income students and English Language Learners.

His plan has met some resistance within Brown’s own party, most notably from Joan Buchanan, the Democratic chair of the Assembly’s education committee, who called the Governor’s plan overly divisive, pitting “rich suburbs against poor communities,” as quoted in the Associated Press.

There are also some within the State Senate that want to soften the plan a bit by spreading the new money out more evenly.

Brown has essentially promised not to compromise on the key aspects of the plan.

LAUSD’s Zazueta thinks that the Governor can get most of what he wants.

Anthony York of the LA Times characterized the differences between Brown and the Senate more about “personality differences” than actual policy disagreements.