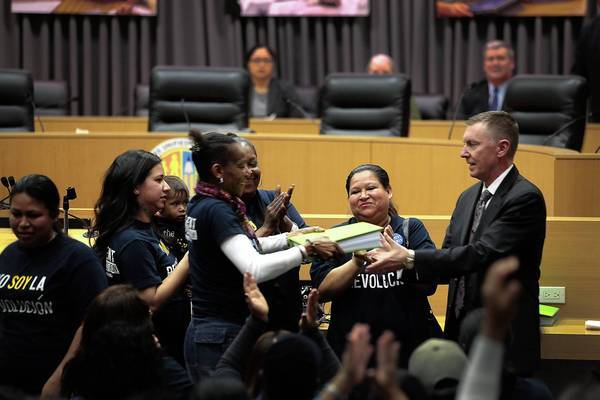 According to the AP’s Christina Hoag, “The parents want the district to install new school leadership, an improved academic program with high expectations for students, and ensure a clean and safe school… If that doesn’t work, parents will move to convert the school into a charter.”

Around 68% of all parents have signed the petition, which was delivered to Superintendent John Deasy.  CBS news has video of the hand-off.

The event was also captured on Twitter, which you can review here.

Some of the parents were frustrated at LAUSD for not having helped the school change quickly enough in the past two years, notes SCPR’s account of the event.

But Deasy welcomed the parents and discussed their frustrations and hopes during a meeting at the Board headquarters.

“I had an outstanding meeting with parents when they came to the office,” Deasy told LA School Report shortly afterwards “We listened and we talked, and we generally welcomed them. The way this works best is if we work together.”

“The parents were welcomed with open arms by John Deasy,” Parent Revolution Executive Director Ben Austin told the LA Weekly, in stark contrast to the reception parent groups met in Compton and Adelanto, where the last two trigger attempts were made (Compton failed, Adelanto succeeded).

The union’s reaction was different — conciliatory but also critical.

UTLA President Warren Fletcher showed up at the media event and, while critical of the trigger mechanism, appealed to parents to work collaboratively.
The LA Times story quotes him saying, “We wish to work with you. We wish to work as a team.”
According to AP,  Fletcher told parents that “If any teacher has not been responsive, that has been a mistake.”
In a written statement, Fletcher continued in those same lines, noting that staff and resources paid for by a grant from the American Federation of Teachers would be assigned to satisfying the needs of 24th St. Elementary. (See full press release here.)
But he also took aim at the trigger idea, the potential loss of teachers’ jobs, and the dangers of charter schools.   “We understand [parents’] frustration, but we believe the answer is not to remove every teacher, and Health and Human Services professional, disrupting the education process… We believe parents do not want a private charter corporation to take over 24th Street Elementary.”

The Parent Trigger is not the right tool for school reform. The end result will be that all faculty will be removed from the school.

Using the Parent Trigger to reform schools is like using an axe to perform complex surgery. As a blunt instrument it does not work.

Deasy will meet with parents again next week once he’s read the petition, which is apparently quite long, since it includes an in-depth plan for the school. In the meantime, his staff will verify the parents’ signatures.