Education data guru Chris Minnich has some advice for school leaders: You may have spent the spring struggling to get food, hotspots and human connection to students, but right now is the time to plan for how school must be different next year if you’re going to address learning gaps widened by the pandemic.

Minnich is CEO of the nonprofit assessment and research organization NWEA, whose recent report predicts dramatic losses from the nation’s school closures. In some grades, students may end up an entire year behind where they would have been academically, absent COVID-19.

The research from NWEA’s Collaborative for Student Growth Research Center suggests that when students head back to school in the fall, overall they are likely to retain about 70 percent of this year’s gains in reading, compared with a typical school year, and less than 50 percent in math. Losses are likely to be more pronounced in the early grades, when students normally acquire many basic skills, and among those already facing steep inequities.

Districts, charter school networks and other schools, Minnich and his colleagues say, may want to consider bringing students back earlier, keeping them for longer school days or academic years, or otherwise increasing the amount of time pupils have with teachers. In turn, teachers will need more strategies for serving students with wildly varying needs in a single classroom.

“The main message from this research is we’re in a moment,” says Minnich. “This won’t be back to school as normal. Figure out what you want school to look like in the fall now.”

NWEA administers the popular Measures of Academic Progress, or MAP, assessment, which tracks student growth by probing for mastery and missing skills. Many districts use the exams to gather baseline data at the start of the year, followed by midyear and end-of-year assessments. 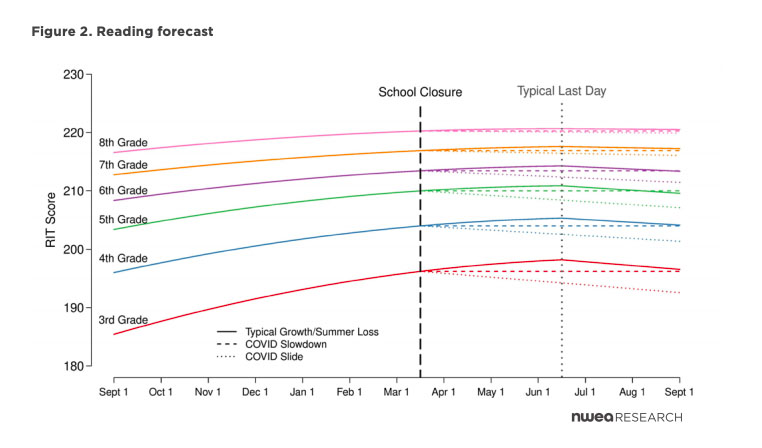 The organization arrived at its new model by extending the slope of typical academic skill loss backward from June 15 to March 15, explains Tarasawa, NWEA’s executive vice president of research. The next step is to examine the slopes according to schools’ poverty levels, but researchers wanted their initial, dramatic findings out now, to nudge administrators to start thinking about the implications.

“There’s a moral imperative to get this data out,” says Tarasawa. “The real question is, what are we going to do about it? In many ways, we can liken it to the models of the disease itself.” She cites data being collected by the Center on Reinventing Public Education on schools’ and districts’ responses to the pandemic as a valuable resource.

Jesus Jara, superintendent of the Clark County School District in Nevada, says he hopes to use federal stimulus funding to create interventions aimed at lessening the projected academic losses.

“Seeing the research is startling, although something we expected,” he says. “My biggest worry is the kids who are already behind.

“We need to be bold. We need to take action,” he adds. “I think this data will shock our community.”

Before the pandemic, the district had seen increased academic growth at a number of schools that have longer days, lower student-teacher ratios and intensive intervention in English-learner support and literacy through its Zoom Initiative.

The district, which serves a number of Nevada cities, including Las Vegas, is scrambling to make sure students are safe and fed, Jara explains. But leaders are already looking at which academic standards are not going to be met this school year as teachers focus on student well-being and academic enrichment, and how to make sure missing academic material from this year is covered in the first weeks of the next school year.

He’s also trying to think through what that school calendar should look like: “Do we need to start the year early, particularly for our elementary students who will see the biggest slide?”

NWEA’s findings build on summer slide research by its own team and others, as well as the impact of other school closures on learning. Chad Aldeman, a senior associate partner at Bellwether Education Partners, says research suggests that if left unaddressed, any COVID-19 slide could have a lasting impact.

Aldeman cites a paper that found that teacher strikes in Argentina had a negative impact on the incomes of students, now in their 30s, who had lost 80 to 90 days of school as children. Those deficits extended as well to the children of those students. That research also suggests that lost learning in early grades has the biggest impact.

“In the long term, there’s pretty good evidence that how much people know translates to lost outcomes and earnings,” says Aldeman. “I think we can expect similar negative outcomes from coronavirus.”

The NWEA report points out that this impact is likely to be compounded for children whose families are reeling from the pandemic’s effect on multiple fronts, including housing, loss of income and food insecurity. COVID-19 learning losses, they project, will be steeper than summer slide.

“Districts ought to be thinking smartly about who is most impacted and how to address their needs,” says Aldeman. “The other thing about this research is it will help people understand how big this is and how important it is to have the resources to deal with it.”

To that end, Minnich and Tarasawa say school leaders would do well to replace traditional notions of what “back to school” looks like with plans for a very different restart.

“How do you help a second-grader missing half a year’s learning come back and also be expected to learn to third-grade standards?” says Minnich. “And what about the third-grade teacher who is going to have kids with a wider range of skills than normal?

“We think teachers are the absolute antidote to this,” he adds. “So how do districts think creatively about teacher time?”