View this story in Spanish 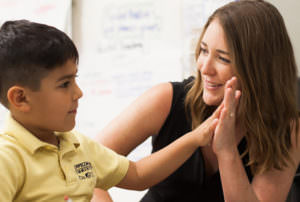 Delivering a promise of college access to their students and having high expectations led four schools authorized by LA Unified — two of them independent charter schools with more than 90 percent of their students Latino and low-income — to be selected as 2017 National Blue Ribbon Schools.

The distinction, announced Thursday by the U.S Department of Education, recognizes schools with exemplary academic success or significant progress in closing the achievement gap for low-income and minority students.

“The biggest reward is knowing that students in this community have a Blue Ribbon school down the street and have access to an excellent education,” said Hadley Huberman, co-leader of KIPP Comienza Community Prep, one of the Blue Ribbon winners.

This is the third consecutive year that KIPP LA has had a winner. KIPP Raíces Academy won in 2015 and KIPP LA Prep in 2016.

Ten schools in the greater Los Angeles area won this year. The three other winners authorized by LA Unified this year are:

“We applaud the teamwork, urgency, and ‘Kids First’ focus of this year’s honorees,” said school board President Mónica García in a statement from the district. “Accelerating achievement is possible with commitment, hard work and love. Congratulations and thank you to the students, families, staff and partners for leading in Los Angeles and the nation.”

“I could not be more pleased by the work being done by their teachers and administrators, and the impact they are having on the lives of their hard-working students. HTPA is achieving everything I could have hoped for when I worked to ensure the founding of this school,” said board member Richard Vladovic, who represents the Wilmington area.

In its statement, the district also recognized the honors to the two independent charters authorized by LA Unified.

“Since the first day that our students walk into kindergarten, we make a promise to them that they will receive an excellent education. We start talking about college on day one,” said Huberman, whose school serves 98 percent latino students, with 90 percent qualifying for free or reduced price lunch. The school serves 826 students in kindergarten through sixth grades. Last year, the school added fifth grade and will expand through eighth grade.

KIPP Comienza opened in 2010 in Huntington Park, a Latino-majority community in southeast Los Angeles. Three years later it had an API score of 978, making it the third-highest-performing school in LA Unified. (The Academic Performance Index was discontinued in 2013. The top score was 1,000.)

“Recognitions like these are not only because of the academic results. We focus on values and character and teach the whole child. As a result, our students are the most happy and joyful kids. They run into school every morning excited to be there, and committed to working hard,” Huberman said.

“I couldn’t be prouder of the 450 scholars who attend Mohan — this award is an incredible recognition of the hard work these young men and women put in each and every day,” said Mohan Principal Loreen Riley in a statement.

Mohan was one of the two high schools in Los Angeles receiving the recognition. Its students are 99 percent Latino and 95 percent low-income. Last year’s graduation rate was 99 percent, with 87 percent accepted to four-year colleges and universities, according to Alliance.

The six other winners in the greater Los Angeles area are:

• California Academy of Mathematics and Science

In total, California had 25 schools recognized as National Blue Ribbon Schools for 2017, among the 342 schools selected nationwide. The complete list of schools and their profiles can be found here.